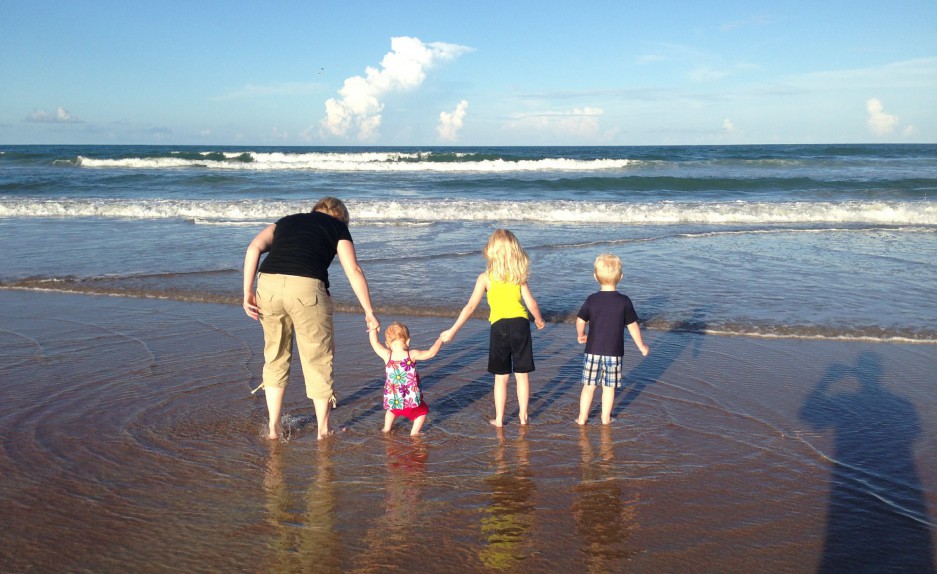 Routine can make a person blind to incredible beauty. It’s something that slowly happens, over time. You can drive the same route to work day after day, but it isn’t until you are in the passenger seat that you notice the old farmhouse hidden just behind the trees. There, stopped at the same very same traffic light for which you normally have very little patience, you are able to take in the true beauty of that old property-the way it sits on the small pond, the character of the tin roof. Being a passenger can afford you the chance to truly take in the vibrance and sights that are otherwise muted by your focus on the destination instead of the journey.

Raising young children with your spouse can have a similar effect. It’s not that you forget that he is wonderful. You’re married to him, after all, and part of marriage is choosing that person again, day after day. But the days become months, and then years. Your children grow, and you settle into a routine. Though it is far more rewarding than your morning commute, it is a routine nonetheless. Together, you master the basics of the parenting thing. Without even realizing it, each of you take on different roles. They become second nature, and you find yourself going through the motions of getting ready for the day, not without care, but more like a well-oiled machine. It just flows.

Until something rocks your world.

For David and I, this was Piper’s autism diagnosis. Piper is our three-year-old firecracker. Born in July and the youngest of our three children, she entered the world full of spunk and joy. Somewhere between the ages of 2 and 3, her bright, contagious laughter dimmed. The words and giggles stopped coming, and tantrums and isolation took their place. Great concern led us to her Pediatrian this past August, and that day set off a chain of events that threw our routine out the window.

For a while, it was terrifying. I felt that while the rest of the world carried on, time for us had come to a screeching halt. I was scared for Piper, and what her future might hold. I was worried about Kaydence and Cameron-riddled with guilt that we were robbing them of quality time because so much of our time was invested in getting their sister the help she desperately needed. I was worried about how this would affect David, and how he might internalize his feelings in such a situation. I was even more worried about the impact our new reality would have on our marriage.

There were some dark days, for sure. Watching your child struggle will inevitably cause a strain on any relationship. Sheer exhaustion broke us down at times and exposed our children to a more stressful environment than we’d have liked. Then, things started to come around. With an incredible support system and remarkable therapists and teachers, Piper started communicating. It was a thing of great beauty to see her light shine back through as the frustration left her body and mind. We certainly put in some hard labor, but the well-oiled machine got a much-needed upgrade to meet the added demands to our routine. With a few hiccups here and there, we worked together and caught onto this parenting thing again.

What happened next was nothing short of incredible.  I deliberately took a step back and became the “passenger” again. I forced myself to actually observe our new routine instead of focusing on where we needed to be next. In doing so, I was given one of the greatest gifts in a decade of marriage; I am now able to see my husband in an entirely different light.

I see a man who has committed every fiber of his being to keeping our family together. It suddenly occurred to me that my heart wasn’t the only one that ached over the past few months. His did, too. Despite that, he has carried on with the calm, steady manner that I always recognized, but never realized was so vital to our relationship. On Piper’s toughest days, I still tend to break down. It is David that reassures me, allows me a reprieve, and steps up to the challenge without fail. I has always been David who gets the children off to school each morning, yet until I sat in that passenger seat and observed his routine, I never considered that he’s used this time all along to learn each of the children inside and out. I see now that this has provided Kaydence and Cameron with the consistency and nurturing they’ve needed to weather this storm with us.

While I’ve never known David to be anything but a loving father, I now see that learning to be a father to a child with autism has made him so much stronger. I’ve thanked so many people along this journey for their support, but the greatest of thanks is truly owed to my husband, a man who never for a second let us lose our way.